See Something, Say Something Campaign. 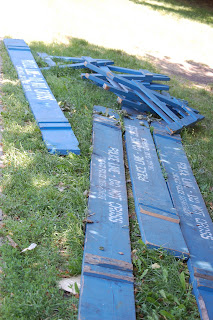 It has amazed me how society has changed throughout the years, before we were almost "care free" without a worry in our mind, living with a sense of "safety" in our own land/country with an occasional controversy within the government versus the people - the "Big Brother"; however, all that changed in one day, well, not really.

Our land [country] has been constantly changing, new laws, new rules, new this, new that, etc., many things the people had voiced their opinion on and many things just got changed and no one knew they did. The Constitution has been under attack for a long time now, just recently it seems like it has been more out in the front line since that special day - 2001 September 11. Yes, I called it a "special day" only because many things had happen then and after that day. We were comfortable in our own backyards, knowing that we can defend our property, the government wouldn't allowed someone to just "walk" into our country to disrupt our ways of life, we can travel about without having the hassle of going through "check-point-charlie" at the airports unless you were coming back in from an international flight and then you dealt with Customs, but things were changing. I can't remember the dates or years that it occurred, but we had our own terrorist attack on our land, the Oklahoma bombing of the Federal building, Ruby Ridge, and Waco; however, I'm sure there might have been some others that I may be too young to remember and that is not counting any of the other events that were mentioned briefly in the media dealing with U.S. citizens abroad in travel or cities with their own "civil war" like problems that were labeled as "riots".

Now as a freelance photographer, I can remember befriending several emergency personnel to gain access to scenes [behind the yellow line] to take photographs, felt free to take photographs of anything I wanted that caught my attention and I thought it was an interesting subject being an object or a person in a public place, and not have my motives questioned.

Recently, I was out and about doing just that! I was bored and took a drive late one evening and went cruising about the area, checking things out to see what can "catch my eye" to photograph. I knew I was limited as to what I would be photographing because I only took a limit amount of gear and was running out of day light hours quickly. I took a trip down an old road to see what I would see and it was not long I had several options. The stadium lit up by the sunset, an empty park, a park with parents setting up practice field for the little leagues of soccer, people jogging along the sidewalk, a wash, and many more things. However, none of these really "caught my eye" so I kept searching, I turned down another road and a construction site caught my attention. A new location for the wilderness park to open in 2012, of course before it became a "wilderness park", back in the late 90's it was just a recreational area where you can freely drive, walk, etc., unto it and set up your blind before day break to take photographs of wildlife as they stir with the first light of day. As I took photographs of the area, the new building, and the old location where they had their sign, a jogger happen to past me and the flash caught her attention. I chuckled to myself when I saw her stop and immediately grabbed her cell phone and started dialing and trying to get my license plate number (I made it easy for her I made sure she could see it), I took my time and continue with my task.

The thought of the campaign that the Homeland Security with local law enforcement that have been overly heard on radio broadcast and seen on television "See Something, Say Something.", came across my mind and the piece of paper that I have printed from the ACLU, "Know Your Rights: Photographers". For the first time in my life I thought to myself, that I should have made copies of that piece of paper and carry it inside my equipment bag(s) and in my vehicle(s) just in case some "citizen" that does not know the Constitution and/or have bought into this "watch your neighbor" syndrome from the 60's cause some delay, inconvenience improv conversation with local enforcement, just because they thought I was doing something wrong.

For those photographers that may be interested in knowing what the ACLU might have to say... Check out American Civil Liberties Union - Know Your Rights: Photographers.

The funniest thing of it, when I down loaded my images unto the computer, I had no photograph of people, not even that jogger even though she did looked like a celebrity.
Posted by T "Hawk" McKinnon at 06:23 No comments: Links to this post